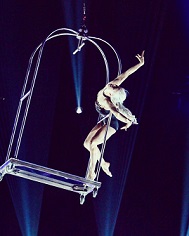 …The perfect synergy of narrative combined with apparatus innovation, costume, props and a stunning animation of character is a feat difficult and rarely seen in circus and something that Masha executed with exceptional originality….
* * *

The 38th   Festival Mondial du Cirque de Demain, which translates to the International Festival of Tomorrow’s Circus recently took place in Paris from the 24th – 26thof January 2017 under the magnificent chapiteau of Cirque Phenix. This unique festival showcases young circus artists from all over the world and this year included twenty-three acts from twenty different countries. The competing performers were divided across two programs, each having the opportunity to perform their act at least twice before an international jury.

The atmosphere was buzzing as circus lovers both young and old came from all directions to share in the excitement of the festival which, on the fourth and final day is brought to a close at the spectacle des Lauréats with the announcement of the prizes. These prizes include the public vote, special prizes, trophies and finally the gold, silver and bronze medals which are tallied from the juries score with a criteria that values creativity, technique and contact with the audience.

Winner of the Bronze Medal, the Lido de Paris Award, the Cirque du Soleil – Performance and Artistic Innovative Vision Trophy, the Club du Cirque Prize and the Telmondis Prize was the marvellous Masha Terentieva representing both Canada and Russia with her act Aerial Hotel Cart. In an interview that took place just weeks after the festival, I was lucky enough to find out the story behind Masha’s astounding act, her experiences growing up in the circus and her greatest inspirations.

The act commenced, a collection of vintage luggage could be seen on the stage and a mysterious metal object with Masha poised gracefully inside it. Within instants Jacques Brel’s haunting chanson, Les Marquises filled the chapiteu, the lights illuminated and as if in a dream the object which was now identifiably a hotel luggage cart would soon fly into the air. The perfect synergy of narrative combined with apparatus innovation, costume, props and a stunning animation of character is a feat difficult and rarely seen in circus and something that Masha executed with exceptional originality.

When asked how her concept for the act came about Masha noted that it sprang from the idea of a “longing for something impossible and imagining yourself flying. Even if it’s on the most mundane object such as a hotel cart.” Masha has always been intrigued by the non-circus people’s fascination with circus folk. “It’s very interesting to notice how some people may have had dreams to become performers, but have never dared to even express them. They deem them silly. Sometimes, it can be heartbreaking to see someone with a very ordinary job bury alive an unreachable dream, such as – to perform, to fly, to be free, to be on stage, to dance, to sing, to act in movies… Whatever. But instead, they are maybe a luggage porter, or a taxi driver, or an office worker.”

Masha’s aerial cart was custom made in Berlin for her by a great engineer Gerd von Stuckenbrok from her original design and as far as she is aware it is the only aerial hotel cart in the world. “When you spend most of your free time at hotels around the world, and if you’ve had a drink or two with your circus friends, what do you do but play on a hotel cart in the corridors?” Masha recounted when asked about the apparatus’ beginning. “I remember this one particular luggage trolley in a Montreal hotel. That’s when I thought…wait a minute!”Though an act like Masha’s is not complete at this glorious light bulb moment, it is also the result of years of training and perhaps in Masha’s case her brilliance is something of a family tradition.

When Calixte de Nigremont, the presenter of the festival introduced her act by noting that Masha had spent her childhood inside her parents’ luggage who were circus artists themselves, I was curious to find out more. Perhaps it was an entertaining anecdote or a fancy fabrication, after all this is the circus! Though I soon found out that it was no embellishment.

“My father, Nikolai Terentiev, is a clown” Masha revealed. “Growing up backstage was incredible. My dad is still on tour with Slava Snowshow and he’s 72. He’s an incredible inspiration to me! When I was 12, my family moved from St. Petersburg to Canada. For three years we toured with Cirque Du Soleil’s show Alegria, where my father performed. It was a dream! Back then, I couldn’t imagine being on that stage. We, the kids were attending a school that was traveling along and of course we all did a bit of circus. It was only natural. One of my first coaches was Magda, a Mongolian contortion teacher, she was fantastic. Sometimes we trained handstands and contortion in the hotel corridors, scaring the living hell out of the tenants.”

If family tradition did not instil enough talent in Masha, her technical formation at Ecole Nationale de Cirque in Montreal and true passion for circus must have been the final pieces of the puzzle. In response to MUSE’s favourite question for artists, who has inspired your craft most? Masha’s stated that “as an artist and a visionary, of course, my father, who is a true Master. Of course, Slava Polunin and the whole magical world that he has created around him.” Her other influences include the Wonderful World of Circus from Toronto, James Thierée, Gypsy Snider and all of the 7 Fingers, Peter James, Daniele Finzi Pasca, Franco Dragone and countless friends and colleagues around the world. For Masha the whole circus community is an inspiration, “especially the one that’s blossoming right now in Berlin.”

A special mention was given to Aurelia Cats, who Masha saw perform her “Cat Act” at Teatro Zinzanni as a young girl. “It was then I was certain I wanted to do circus and not just “do circus”, but to do it like she did it: with seeming effortlessness, with paying a lot of attention to character work, musicality, and fluidity of movement. To me she was perfection on stage, and she was also super nice and an amazing woman.”

Masha’s career has already seen her working for a range of companies including Cirque du Soleil, GOP and the Broadway musical Pippin. She believes that all of these experiences have allowed her to create her own work and develop her own style. “Youlearn something from every job,” Masha noted. “I always thought individual style is as important as versatility. Sometimes there is more freedom to create, propose and improvise within a show, sometimes there’s less. After doing a great variety of different contracts, it became easier to identify what kind of work interests me and go confidently in that direction.”

Masha has indeed gone confidently in her own direction and the originality found in her performance at Cirque de Demain is testimony to this fact. Not only is the apparatus Masha’s original design but also the concept, direction and choreography are entirely her own work. When it came to finding the right music to suit her number Masha admitted that “it is one of the hardest parts of creating an act. It takes thorough research and understanding of the intention behind the act.” For Masha, Jacques Brel is more than a musician and a poet “I consider him a genius,” said Masha.

“For me, it doesn’t have to be literal. The music can be abstract, as long as the emotional connection is there. This particular song has a special intensity and sadness to it, as when he wrote it, he knew he was dying. He is talking about “Les Marquises”, the last stop on his voyage around the world, the paradise islands in French Polynesia, where he would spend the last four years of his life. There is an indescribable loneliness in his lyrics, his inability to escape fate. I guess it’s exactly that, which connected me to this feeling I was trying to achieve through my performance.”

My final question to Masha was what advice she could offer emerging circus artists. Her beautiful response; “be proactive and passionate. Do it for the love – live and breathe circus. Support each other. Don’t take yourself too seriously. Play and dream together. Stay positive, never complain, and nurture your creativity!”

For those who missed Cirque de Demain, Masha’s Aerial Hotel Cart act is presently featured in a show called Blanc de Blanc from the Australian company Strut & Fret. You can catch them at the Adelaide Fringe this February and March. Find their exact dates by clicking here.